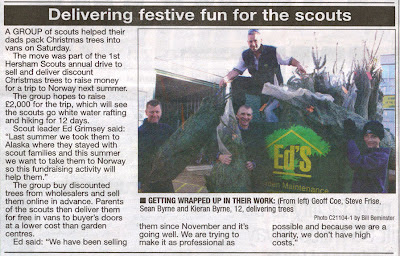 Edward Mauleverer, of Thames Ditton, and four of his colleagues joined hundreds of runners and walkers at Shalford Park, Guildford, to take part in the 10K trek on the morning of Sunday 20 April 2008.

The Edâ€™S team took part in the fun run to kick-off a week long series of fundraising activities supporting National Welly Week, which begins today. Garden Organic launched Welly Week five years ago aiming to raise funds to help educate and inspire people about organic gardening, farming and food for a sustainable future for ourselves, our children, our environment and our planet.

Garden Organic which is celebrating its 50th anniversary in 2008, is specifically raising funds to help maintain its world class organic demonstration gardens and to support the vital work of its Heritage Seed Library, which preserves over 800 varieties of vegetables under threat of extinction. It is also intending to widen its education programmes to help more children learn about food and organic growing, and enable growers worldwide to adopt organic methods through its international development programmes.

Edward Mauleverer, founder of Edâ€™S Garden Maintenance says, â€œWorking in wellington boots is one thing, but running in them is certainly another! At Edâ€™S, we are often required to provide our customers with the work needed to set the foundations for organic growing, whether weâ€™re turning top soil on allotments or advising on compost facilities. So weâ€™re delighted to be supporting the really important contribution Garden Organic makes to encouraging a sustainable future.â€

Fund-raiser at Garden Organic, Liz Fredericks, says â€œWeâ€™re delighted that Edâ€™S were so keen to jump into their wellies outside of their working hours to raise money for Garden Organic. We launched Welly Week to remind people that being outdoors is fun and rewarding and that growing organically is important for the future of our children and the planet. We would like to thank Edward and the team for their support.â€